Alex Telles finds himself on the front page of Wednesday’s Diario de Sevilla, with a Manchester United exit closing in for the fullback.

On Tuesday, it was revealed in Brazil that the player was on the verge of a loan move to Sevilla, with it even being claimed that only paperwork and medical tests needed to be completed for the move to happen.

Diario de Sevilla report their local club are ‘close to closing’ a deal for the Brazilian, and they point out sporting director Monchi has been keen on the player since Telles was at FC Porto.

ABC Sevilla report that Telles would arrive on a similar deal to the one which took Anthony Martial to Spain in January. It’s once again stated the switch will be a loan move, with ABC 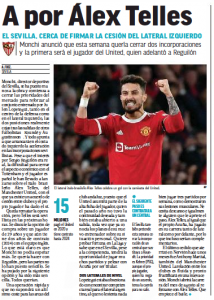 adding that due to Telles’ high wages, Manchester United will have to continue paying a percentage of them, but they don’t seem to know how much.

Over at Marca, they say there’s ‘already an agreement’ between the two clubs on a loan deal, and Telles ‘has said yes’ to the move.

It’s stated the switch to Sevilla will happen in the ‘next few hours’, with Monchi rushing to get a deal done.