Chelsea’s efforts to bolster the squad are ongoing as Thomas Tuchel’s men are preparing to take on Villarreal in the UEFA Super Cup tie at Windsor Park later today.

The Blues are expected to shift their focus to Sevilla’s Jules Koundé, after completing a deal for the Inter Milan striker Romelu Lukaku.

After weeks of ‘tranquillity’, Tuesday ‘was marked by the large number of efforts made by Sevilla’, both in terms of incomings and outgoings.

That’s according to ABC Sevilla, who add the France international’s ‘only intention’ is to play in the Premier League.

Jonathan Kebe, the centre-back’s agent, has stressed to the La Liga side that ‘Chelsea will present a proposal’ again, a sign that Tuchel has ‘not forgotten about him’. 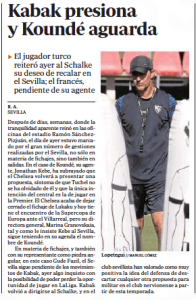 The Champions League winners are focused on the clash against Villarreal, but the centre-back’s representative insists to Sevilla that Chelsea director Marina Granovskaia continues to have the defender’s name on her agenda for this summer.

With Kebe expecting a proposal from Chelsea and Tuchel keen on Koundé, developments would be expected on this case after Lukaku completes his return to Stamford Bridge.

Sevilla, for their part, are planning to replace Koundé with Schalke’s Ozan Kabak.