Earlier today we covered a morning report from Eindhoven Dagblad which stated Tottenham and PSV last night agreed a deal for the transfer of Steven Bergwijn.

Spurs will pay €30m as a flat fee, and a further €2m in bonus payments.

Tuesday’s edition of De Telegraaf has some words from the player’s agent. Fulco van Kooperen spoke to the Dutch newspaper on Monday, before the deal is said to have been agreed.

The agent clearly wants to fight back and protect his client’s reputation, given some of the things being claimed in the Netherlands about Bergwijn’s conduct over the potential move to Tottenham.

Van Kooperen had a meeting with Jose Mourinho and Daniel Levy on Thursday, and there’s been subsequent reports that after PSV’s cup defeat that evening, he sent a message to the Eredivisie club ‘trying to force a transfer immediately’.

The agent is quoted as saying: “I did indeed send a message shortly after the game, purely asking if we could sit down on Friday morning. We’re in the middle of the transfer window, so you know something like that can happen. It would be worse if I didn’t report that I had spoken with Spurs at all. The timing of such a message is never right, I deliberately waited until after the game.”

The Bergwijn camp weren’t welcome in Eindhoven, and then Spurs offered €30m.

PSV anger over the situation was clear, to which Van Kooperen has responded: “I don’t understand. And I have already made that known. I just do my job and come and offer a deal. As a club, that should be viewed positively, I think. If clubs of the calibre Spurs stop coming, you really have to worry. In the weekend everything went well in consultation with John de Jong and member of the board Peter Fossen.”

Regarding the perception of Bergwijn, the agent said: “Steven is not a bandit. He has always worked for PSV and last summer, despite the interest of other clubs, he also 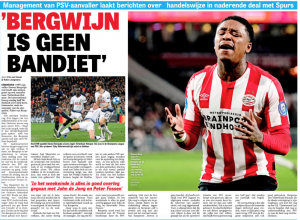 signed. It was then agreed that he would stay for at least another year.

“However, it was said that if the sporting situation of PSV were unexpectedly not good, there would be a good chance that we would be sitting at the table. That has now happened. And we also immediately stated: “If you don’t want it, Stevie will just stay another six months.” We would also understand that.”

PSV are currently fifth in the Eredivisie table.