Pascal Struijk is still to make a decision on which international team he’ll represent in the future, reports Tuesday’s edition of De Telegraaf.

The Dutch newspaper once again brings up interest from Leicester City and Napoli on a club level, and states Roberto Martinez has asked the Leeds United player to choose the Belgian national side.

Struijk was born in Belgian but has represented the Netherlands at U17 level. He’s been given the opportunity to play for the Oranje U21 side at the upcoming European Championships in Hungary, yet has declined the invitation for now.

The Leeds player wants more time to consider his options and is in no huge rush to choose which country he’ll aim to play senior football for.

De Telegraaf quote Tim Vrouwe, the Leeds United player’s agent, as saying: “Pascal needs more time to make a good choice. This is not easy for various reasons. He is absolutely flattered by the invitation for the Dutch juniors. But if he takes action for this, he can no longer come out for Belgium. The top team of one of these superpowers is the main goal for Pascal.” 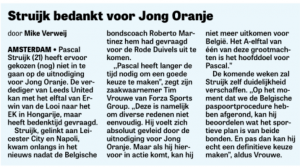 The agent added that Struijk is still in the process of getting a Belgian passport, and when he does they’ll assess the future plans of both countries before making a decision. He’ll have to hope they don’t get frustrated before then and push him to one side.