Home Europe Agent refused to travel to Barcelona unless he was ‘guaranteed money’ –...
SHARE

It’s fair to say that of the more complicated transfer sagas of recent years, Matthijs de Ligt and Barcelona was up there with the best of them.

For much of the summer, it appeared that De Ligt would be joining Ajax teammate Frenkie de Jong in Barcelona, only for the defender to turn heel and end up at Juventus.

It was felt that was because of Mino Raiola’s intervention in the matter and Mundo Deportivo explain today how that was very much the case.

They say that De Ligt had told Barcelona ‘do not worry, I want to go to Barça’ and that led to them pushing hard to sign him. Raiola, though, had other ideas and Barcelona got to experience that first hand.

When they first contacted Raiola about a move, he was clear he wanted a commission, ‘guaranteed money’, that Barça were not willing to pay, worth around €8m. The Spanish club made that clear so he told them he wouldn’t travel for negotiations.

Looking to overcome this impasse, Barcelona travelled to Milan to negotiate with Raiola. At this meeting, the agent made it clear he wanted the commission other clubs were offering.

A second meeting then took place, and he revealed that he wanted De Ligt at Juventus and only saw him at Barcelona in 2022.

Barça saw the ‘super-agent’ could not be bent so contacted the player directly, telling him; “With Raiola, we can’t negotiate, we’re too far away. And they tell us you’re very advanced with Juventus. Promise us that before you make a decision, you’ll tell us. If we can, we’ll match the offer or beat it.”

De Ligt told them not to worry; he wanted Barcelona. In the meantime, they were moving for De Jong, and the defender contacted the club to find out what was happening. They admitted they couldn’t afford the money Raiola wanted.

The young defender insisted again he wanted to move to the Nou Camp and made it clear that money was not an issue.

With this knowledge, Barça contacted Raiola again, and he appeared to be conciliatory. He made it clear he knew his client’s intentions, and he would not charge excessive commission. Barça, foolishly, believed him. 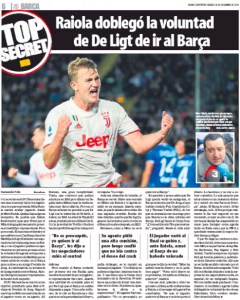 They then met in Amsterdam in May, but there was a surprise waiting for them. De Ligt had turned and was suddenly in line with Raiola, claiming he did not feel valued by Barcelona.

That left Barça with ‘nothing to do’ but give up and let De Ligt head to Juventus. Raiola had ‘bent the will’ of another player and ‘brainwashed’ the youngster.