Leicester City have signed two players from Sporting in the past few years, and things didn’t go as expected for both of them. Adrien Silva and Islam Slimani couldn’t do much for the Foxes, and were linked with a return to the Lions last summer.

It turned out that Adrien stayed at the Premier League side, despite not getting much game time this season. Slimani was sent to Fenerbahce on a loan deal.

Earlier today, we covered reports from Portugal which showed Adrien Silva watching Sporting’s game in Lisbon as he was ignored by Claude Puel for Leicester City’s match against Burnley at the weekend.

And now taking a look at the weekend’s newspapers, a picture also shows that Slimani’s agent has met the Sporting president Frederico Varandas in London last week. 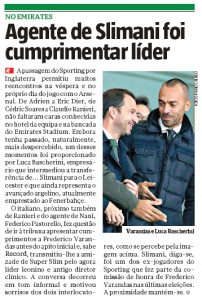 It happened during Sporting’s match against Arsenal for the Europa League. Newspaper Record claims that Luca Bascherini ‘made sure’ of going to Varandas’ box at the Emirates Stadium to greet him and have an ‘informal chat’.

At the time Slimani played at Sporting, Varandas used to be a chief doctor at the club, so they knew each other pretty well. The player even supported his candidacy during the elections earlier this year.

This news will obviously feed some rumours about Slimani’s return to Sporting in the future, and we’ll be here waiting for it.