Earlier this week, reports from the British press explained that Philippe Coutinho has given his ‘OK’ to joining Arsenal, and the Gunners are waiting to find an agreement for a loan deal with Barcelona.

It was also suggested the Gunners are ready to pay a loan fee, but want the La Liga side to pay part of the 28-year-old’s salary.

Sport have responded to these claims, and provide a background into the north London club’s interest in the attacking midfielder.

Mikel Arteta’s side are keen to sign the former Liverpool star, and want either the player or the Catalan club to make an effort to seal the transfer.

Barca, for their part, are clear that if Coutinho wants to move to the Emirates, he will have to take a pay cut, and they don’t want to pay even a ‘single Euro’. 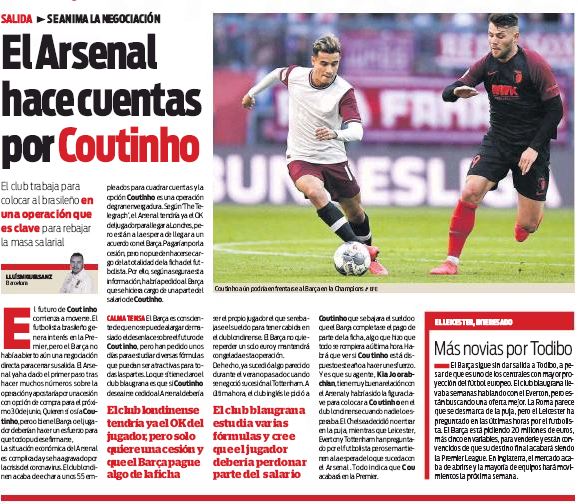 Kia Joorabchian, the South American’s agent, shares a good relationship with Arsenal, and he’s the ‘key figure’ to place his client at the English club.

Sport add Leicester City, Everton and Tottenham Hotspur have asked about Coutinho, but they are waiting to see what will happen with Arsenal.

Barca’s unwillingness to pay part of Coutinho’s salary while he’s out on loan is also reported by Mundo Deportivo. 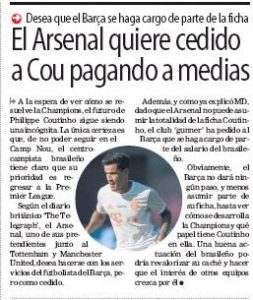 The player is currently on loan at Bayern Munich.  Mundo state Barcelona ‘will not take any step’ in deciding Coutinho’s future until the Champions League is completed.

Barca remain hopeful there will be more suitors for Coutinho, if he impresses in Europe’s elite club competition this month.