Home Europe Agent to hold meeting in ‘next few hours’ as Tottenham and Newcastle...
SHARE

Over the past few weeks, we’ve seen both Tottenham and Newcastle United linked with a move for Stefan De Vrij.

The Mino Raiola client is currently in the final year of his contract at Inter, and with a renewal agreement yet to be struck, the door is slowly opening for clubs to approach him in January.

Ever since Antonio Conte took over at Tottenham, the links have intensified somewhat, and Gazzetta dello Sport on Thursday explain this avenue is one ‘to keep in mind’ going forward, especially if no new deal with Inter is found.

FC Inter News have a bit of information on the matter too, claiming that Raiola is going to hold a meeting ‘in the next few hours’ with the Serie A side to see what the plans are for the Dutchman.

De Vrij is reportedly happy at Inter, which is why, as of today, he ‘does not evaluate’ other options, even though both Tottenham and Newcastle United are reportedly ‘on his trail’ for a summer transfer. 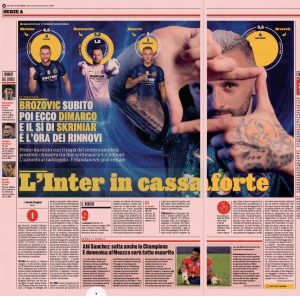 There has been a ‘promise’ of a renewal for the past few months, but that hasn’t happened yet, and with the Italians still struggling financially despite two big sales in the summer, it could be that getting their defender’s wages off the books will help, especially with the likes of Marcelo Brozovic also needing a new contract.

They say one man’s loss is another’s gain, and it seems both Tottenham and Newcastle are patiently waiting to see if they can benefit from all this.