It’s been abundantly clear Barcelona must sign attackers in the winter market.

Sport say the La Liga side are ‘already very clear the most viable option goes through Chelsea’, where Timo Werner and Hakim Ziyech are named as targets.

There have been ‘new contacts’ between the La Liga side and the Blues for the German and the ex-Ajax star. Thomas Tuchel’s side are ‘totally open’ to talking about the departure of their two players, ‘under acceptable financial conditions’.

Barca initially made contact with the Champions League winners in October. The Morocco international was the one that suited them the best, but the door was left open to sign the ex-Leipzig man.

Xavi Hernández’s side have also contacted the duo’s environment and have found out the two attackers are open to leaving Stamford Bridge in January. 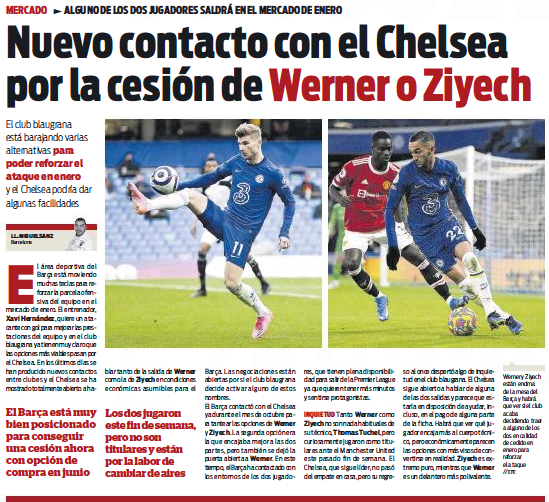 Tuchel started Ziyech and Werner in his side’s 1-1 draw against Manchester United at the weekend. This had ‘aroused some concern’ at the Camp Nou.

Chelsea, however, are ‘still open’ to letting one of the two leave and they would be in a ‘position to help’, by paying part of their wages during their loan stay at Barca. The latter are ready to do business on a temporary deal, with an option to make it permanent next summer.

From the Spanish club’s economic point of view, signing Werner or Ziyech can become a reality. However, it will be necessary to see who among the two would fit Xavi’s sporting needs.

Player to be presented by new club next week after Chelsea...