Erling Haaland’s advisor, Mino Raiola, admitted last month only 10 clubs in the world will be able to sign the Borussia Dortmund star and four of them are from England.

According to this week’s SportBild, the 20-year-old sees himself only at six clubs and they are United, City, Liverpool, Real Madrid, Barcelona and Juventus.

It’s claimed the striker is determined to join ‘an absolute top club’ next rather than taking another intermediate step by leaving BVB.

The Norway international and ‘his most important reference person’, father Alf-Inge Haaland, want to be convinced by the overall package to join a new club. He earns €8m per season at Dortmund and an increase in salary will not be sufficient.

According to the report, this is where the Citizens fit in. Apart from their strong economic conditions, the Manchester club can lure the attacker with the presence of Pep Guardiola and the club’s ability to challenge for trophies in all competitions.

Erling’s father played for the Etihad club in the past and having the family connection, City ‘hold an extra trump card in poker’ for the Haaland transfer.

Guardiola currently has Gabriel Jesus and Sergio Agüero as the 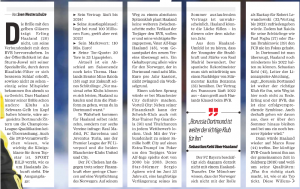 recognised strikers in his squad. The Argentine, who will turn 33 in June, has a contract expiring in the summer and Haaland can be his successor at the club. All these factors mean… ‘advantage Manchester City’.