It looks like Gedson Fernandes isn’t the only player who could be leaving Portugal to join Tottenham Hotspur in the January transfer window.

According to reports from the Portuguese media in the past few hours, Porto striker Zé Luís could be on his way to London as well.

This possibility was first reported by SIC Notícias on Tuesday night, and Wednesday’s edition of newspaper Record could confirm the claims.

Zé Luís would sign for Tottenham Hotspur on a loan deal, and it’s Jorge Mendes’ company Gestifute who have been working on the move. Spurs would have an option to buy him as well. 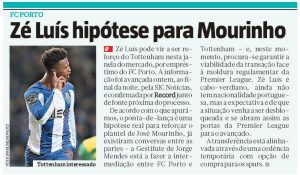 The player was born in Cape Verde and doesn’t have an EU passport, and that’s why the super agent has been pulling strings so they can find a way for the player to get a work permit for the Premier League. Record says the expectation is for everything to work out and the 28-year-old to have ‘opened doors’ in England.

It’s worth recalling that Jorge Mendes is also the one who took care of Gedson Fernandes’ move from Benfica. Now the transfer of Zé Luís sounds like a little help for José Mourinho, who needs a temporary replacement for Harry Kane.