Manchester City are owned by the City Football Group and they have either acquired full or majority stake at a handful of clubs in the last few years.

Lommel SK are among them and the CFG took control of the Belgium club in May 2020, and Pep Guardiola’s side has allowed some of their young talents go out on loan to said clubs, including Diego Rosa.

City took the 18-year-old from Grêmio at the start of this year and immediately sent him out to Lommel, and although the young midfielder will play next season in Belgium, he will not be training with them for pre-season.

That’s because the former Barcelona manager has recalled him to train with City’s first team for the next few weeks, according to Het Belang van Limburg.

Rosa has left Belgium and flew to Manchester on Saturday to ‘train under the wing’ of the City manager. 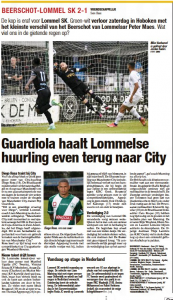 Lommel manager Liam Manning is of the belief Rosa will benefit a lot from training under Guardiola.

“This is a great experience for Diego. Manchester City are currently missing so many players because of the European Championships and the Copa America in South America that they have invited Diego. This is a fantastic opportunity for him to use Manchester City’s training facilities,” Manning said.

HBVL state Rosa will return on time to Lommel for the start of the new season next month, and while Manning won’t have him around for the next few weeks, he’s clearly thrilled at the idea of his player learning from one of the best around.

‘He will be gone in January’ – Belief West Ham could...

‘My favourite villain’ – Argentina falls a little more in love...