Tottenham Hotspur’s interest in the Sporting midfielder Bruno Fernandes is big news in Portugal on Wednesday, getting the front page of newspaper A Bola.

The way the outlet breaks the news really makes it look like the talks are in very advanced stages, but that’s still not how things stand.

A Bola claim is that Fernandes has entered Tottenham’s list of targets for next season. The London side are side to be currently planning the signings for the summer market and the Portuguese international is among the top names.

The player has 13 goals and 16 assists this season, which is definitely not too bad for a central midfielder. 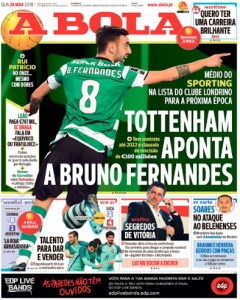 But there are no reports of talks, negotiations or bids for the 23-year-old. Just an interest that could turn out to be quite a big deal for Sporting in case of a transfer.

Fernandes was the first of their players to get a €100m release clause. That doesn’t mean it is the price they will demand, but it gives the Lions a big protection when negotiating.

A Bola doesn’t mention how much will Sporting ask, so things are really a bit dark regarding this transfer.

All we can know for now is that Tottenham are impressed with Fernandes’ displays this season, and A Bola trusts this information enough to put it on their front page.