It’s that time of year when the Ballon d’Or arguments really get going. The winner will be announced in Paris on December 2nd, and then everyone can turn their arguments into laughter as strange votes are picked out from the published list.

The current frontrunners are Lionel Messi and Virgil van Dijk. Liverpool’s Dutch defender had another great season for his club, which saw the Reds win the Champions League and come second to Manchester City in the Premier League.

Jurgen Klopp has been backing his man, although it’s clear the German manager wouldn’t kick up too much of a fuss should Barcelona’s star take the award instead.

Who will win is a question being asked of many figures in football in recent interviews, and it’s the Liverpool and Barcelona players who are most often mentioned.

When asked by Il Mattino who he’d give the Ballon d’Or to, Zola said: “Hazard made an extraordinary season with us at Chelsea last year. He deserves it.”

The Italian newspaper didn’t question that, but it would surely be controversial if Hazard, despite his good Chelsea season, did walk away with the trophy. 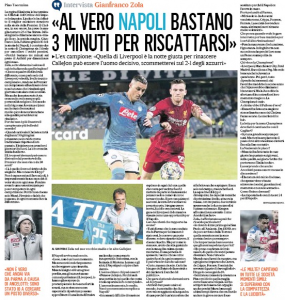 Since swapping Stamford Bridge for Real Madrid he’s very much had a mixed time, and hasn’t looked like a player battling the Liverpool and Barcelona two for the ‘best in world’ title.

Van Dijk is currently odds-on favourite with English bookmakers, with Messi close behind him, whilst it’s possible to get 500/1 on Hazard. Zola is probably letting his Chelsea bias get the better of him.