Brazilian wonderkid Reinier was one of the most sought after South American youngsters in recent months with Premier League clubs like Arsenal, Manchester City and Liverpool all believed to be chasing him.

The 18-year-old’s father even revealed contacts with the Gunners and the Champions League winners.

However, it was Real Madrid who won the race for his signature as the Spanish club acquired his services from Flamengo. Having signed a contract until 2026, he will join up with the Real Madrid Castilla squad.

Reinier’s father Mauro Brasília opened his door in Rio for Spanish newspaper AS and had a chat with them for over three hours.

During the lengthy conversation, Mauro Brasília revealed to have made a trip to England, during which he and his son visited Arsenal and City facilities.

“We were also in the training centres of PSG, Arsenal and Manchester City,” Mauro Brasília said.

When further quizzed on which club’s facilities left him with a good feeling, Reinier’s father explained: “They all have great facilities, with state-of-the-art technology and people who really know their stuff. 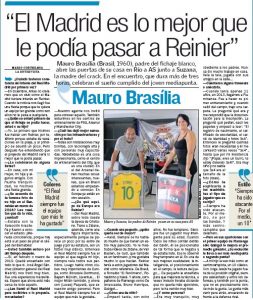 “Valdebebas is very impressive, as is City’s, which feels like a little city. At Arsenal they have a lot of interesting things, new things that in Brazil we’re only just starting to see. It’s a step up in Europe.”

Unfortunately for the likes of Arsenal and Pep Guardiola’s side, they couldn’t land Reinier, who is considered one of the brightest young talents in Brazil.