Marseille’s Isaac Lihadji made his first team debut in September and a month later he impressed for France at the 2019 U17 World Cup, scoring three times and managing two assists in seven appearances.

According to L’Equipe, André Villas-Boas has not summoned the 17-year-old for first team training in recent months because he’s waiting for the teenager’s contract situation to be resolved.

It’s claimed the winger’s agent Moussa Sissoko has several offers and one of them is from Arsenal.

The player’s entourage has filtered five offers that are ‘financially interesting’ and also more ‘attractive’ sporting-wise than the one proposed by the Ligue 1 side.

Marseille’s first offer came in July when they proposed a three-year deal (with an option for two more years). The financial positions between the parties were distant and after numerous meetings, the French club’s second offer arrived in October.

The young winger is still not close to reaching an agreement for his first contract, which has allowed other suitors to approach Lihadji’s representative in recent months. 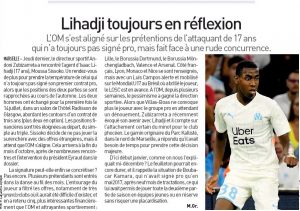 Arsenal are one of the clubs chasing Lihadji and they will face competition from European clubs to sign the youngster.