At the age of 15, Maksymilian Boruc made his senior team debut for lower league Swedish club IFK Värnamo.

According to Polish newspaper Przeglad Sportowy, the goalkeeper caught the attention of clubs from England, Germany and Italy and had trials with Stoke City, West Bromwich Albion, Schalke and Torino.

Now 16, Boruc has snubbed the Baggies and other clubs in order to join the Potters, with whom he has signed a two-and-a-half year deal, and this decision was taken after the teenager consulted with his family.

It is explained the youngster’s family believes a club like Stoke would be an ideal place for the development of the player, and his father explains in detail that the Championship side’s transfer policy was a factor in his son’s decision to join them.

“From the point of view of a keeper, it’s an ideal situation, because there will be a lot of work. Stoke focuses on young players, the U23 goalkeepers train every day with the first team,” Paul Boruc stressed.

“There is a prospect that if everything goes in the right direction, Stoke is not a club that would suddenly buy a goalkeeper for several million pounds, but would prefer to promote players from the academy.” 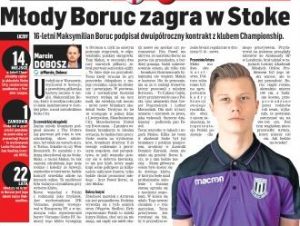 An interesting fact mentioned in the report is that Maksymilian is a distant cousin of Bournemouth shot stopper Artur Boruc, but the two have not spoken to each other as they’ve had an opportunity to meet so far.