Angel Gomes refusing to renew with Manchester United has been the big story this week regarding the Premier League club’s youth system.

He’s been linked with a move to Chelsea, although Frank Lampard distanced himself from those claims on Tuesday. Benfica have also been put forward as an option, but there doesn’t seem to be anything concrete coming from Portugal in that regard.

Gomes isn’t the only youngster who hasn’t renewed and will subsequently be leaving Old Trafford, Largie Ramazani is in the same situation. The 19 year old Belgian forward failed to make a starting appearance for Manchester United’s first team, getting six minutes against FC Astana, and is now setting his sights a lot lower.

Walfoot, a website in Belgium, reports Ramazani is set to join UD Almeria.

It’s explained there was interest from elsewhere, including from several big European clubs, however, crucial in the decision making process was getting playing time.

Almeria are currently fourth in LaLiga2 and have a chance of promotion to Spain’s top division. 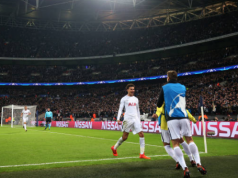