Donny van de Beek has found it hard to get regular minutes in his debut season at Manchester United.

Having arrived at Old Trafford from Ajax last summer, the midfielder has been restricted to only four league starts and 11 more starts in the remaining competitions, out of which seven came in the FA Cup and EFL Cup.

The 24-year-old has mainly settled for a place on the bench this season and is likely to start there in the Europa League final against Villarreal on Wednesday.

Former United scout Ed van Stijn is of the belief the Netherlands international’s limited playing time is down to a change in system.

“I see clear similarities between the problems that Van de Beek has and that Davy Klaassen had when he went to Everton,” Van Stijn told De Telegraaf.

“These are guys have spent their entire football life at Ajax and were able to play from their strength in that specific way of playing. When they come into a completely different environment, they are thrown far back, because they suddenly have to do things they have not learned.”

Meanwhile, Arnold Mühren, who became the first Dutchman to join the Old Trafford club in 1982, doesn’t share the same view as Van Stijn. The former Manchester United midfielder has questioned the English club’s decision to sign his compatriot.

“When you see how little he is used, you really wonder why they actually paid €39m for him. That midfield is really overcrowded,” he explained.

“Bruno Fernandes plays in the position where Van de Beek comes into his own, and in my view he one of the most important players of Manchester United. And then they also have McTominay, Fred, Pogba, Mata and Matic for the midfield.”

Mühren is of the belief leaving Ole Gunnar Solskjaer’s side this summer might be best for Van de Beek.

“They say ‘he needs to get used to it’. But nobody has to get used to that. The problem is that he doesn’t have enough to play. At his age it is important to keep clocking minutes,” the 69-year-old said.

“For Oranje [national team], it also becomes a problem. If the national team coach now has to choose between Klaassen and Van de Beek, the choice might fall to the former. 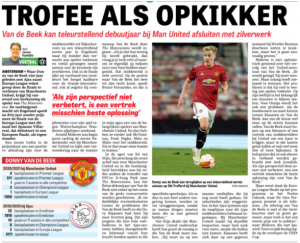 “Van de Beek must hope for an injury or a departure of midfielders at United to get a chance, but in that case one or two will be added.

“I have seen that they are also linked to Jack Grealish. If his perspective does not improve this summer, a departure might be the best solution for Van de Beek.”