Another day and more transfer claims from Mundo Deportivo, and Spain generally, about Phillipe Coutinho moving to Barcelona.

The Catalan press seem to be stuck between an unhealthy bitterness which sees repeated attacks on Jurgen Klopp, and a confidence verging on arrogance which expects Barcelona to get the Brazilian in January.

Mundo Deportivo again have Coutinho on a section of their front page on Wednesday, although he doesn’t get the whole thing this time, what with actual Barcelona football matches to cover.

Inside it’s claimed that Kia Joorabchain, a figure who repeatedly pops up in the claims, is at the centre of talks between Liverpool and Barcelona, and there’s been contact in London this week. Inevitably, Mundo Deportivo state that officials have spoken around events for The Best awards in London this week, helping Barcelona edge forward on a deal.

Barcelona have been informed, via an agent, that Liverpool want €150m for a January transfer, and the €80m + €30m in bonuses preference is pushed out once again. 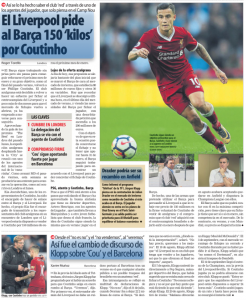 It must be noted, to be fair to the Catalan reports (and we do try to be), that it’s not simply an €80m offer being proposed, as has been transmitted by sections of the English media, and the €30m is always there and considered a figure that would be paid eventually.

Mundo Deportivo say it’s clear the answer has to be ‘yes or yes’ for a January move, because there’ll be more competition in the summer, which sort of shakes the Catalan point that it’s only Barcelona who Coutinho would consider.

Tune in tomorrow for more from the Catalan press.