Emiliano Martinez left Arsenal during the last transfer market, determined to be a first choice goalkeeper and finding that position at Aston Villa.

He’d been battling with Bernd Leno at the Gunners, and with Mikel Arteta unable to give the Argentine assurances, a transfer was the only way out of the situation.

That then left the Premier League short in the goalkeeping department and they brought Rúnar Alex Rúnarsson in from Dijon. The 25-year-old may not have been the first choice for Arteta, with claims from Spain of Arsenal interest in Aitor Fernandez.

Signing for Levante in 2018, the stopper has managed to win some fans with his performances for the La Liga club.

In an interview with AS, he’s been asked about interest from Arsenal and Athletic Club Bilbao and was prepared to confirm that both clubs had been in touch to try and sign him: 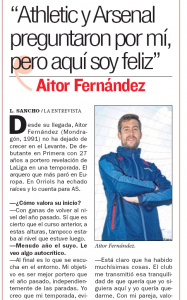 “Yes, it’s true that there have been contacts. Quite a few clubs have asked, and those are two of them. But here I have been very happy, and I hope to continue being so.”

Fernandez is first choice with Levante and wouldn’t be so at Arsenal, therefore despite the lure of the Premier League and such a big club, he’s been happy to continue where he is.