Home Europe “Yes, why not?” – Leicester City player reveals he is ready to...
SHARE

After scoring 27 goals and registering six assists with Sporting during the 2015/16 season, Islam Slimani left the Portuguese club and made a switch to Leicester City in 2016.

The Algerian international failed to replicate that form for the Premier League outfit and his struggles at the King Power Stadium saw the Foxes send him on a season-long loan deal to Fenerbahçe in the summer.

At the end of the season, he will have two years left on his contract with the English side and the striker sat down for an interview with Portuguese publication O Jogo, which was published in today’s edition of the newspaper.

The 30-year-old has categorically ruled out a move in the winter market, but has opened the door for a return to Sporting next summer.

“Back [to Sporting]? Yes, why not? But, in this moment, I have a contract with Fenerbahçe. I’m going to honour that commitment,” Slimani explained.

“We will see at the end of the season what might happen. Now, I’m focused on Fenerbahçe. We’ll see… Never say never in football – of course one day I hope to return to Sporting.” 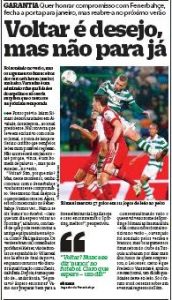 Having struggled so far during his temporary spell in Turkey, it is likely that Leicester would cash in from Slimani’s sale if they receive a convincing offer.