As you’ll be very aware of by now, the Italian press are getting quite excited about the prospect of Emre Can arriving in Serie A, with Juventus edging ever closer to announcing the German international’s free transfer to their club.

That’s, at least, what Corriere dello Sport were reporting a week or so ago, and now Tuttosport are indirectly jumping on the action in their match report of Liverpool’s 2-2 draw against Tottenham at the weekend.

With a super original “Yes, Juve Can” headline, the Italian newspaper, almost as if Emre was already a Juventus player, use the former Bayer Leverkusen starlet’s performance against Mauricio Pochettino’s side at the weekend as an example that Spurs have ‘limits’. 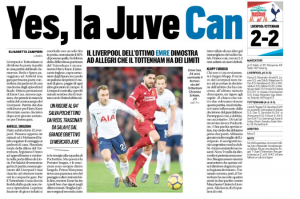 With Max Allegri’s side readying to face Tottenham in the Champions League, Tuttosport heavily hint Emre Can’s ‘great’ showing for Liverpool against the London club as something for fans of the Serie A champions to look forward to next season.

Described as the ‘great objective’ of Juventus’ transfer plans, the Italian newspaper are being as subtle as a brick with their intentions here.

We get it. No need to ram it down our throats. And please stop using that annoying headline.