Former Manchester City defender Jason Denayer has revealed his initial struggles at the club, and how it was a ‘shock’ playing for Sunderland.

Denayer joined Manchester City’s youth setup back in 2013, arriving in a £248,000 deal from Belgian academy side JMG Academy Lier.

He would spend the next year working his way up to the Manchester City first team before heading out on various loans in a five-year-stay at the Etihad, playing for the likes of Celtic, Galatasaray and Sunderland before joining Lyon permanently in 2018.

He failed to make a single first-team appearance for City,  with 23 appearances for the Under 23s and eight for their Under 19 UEFA side all to show for his time at the club.

Things just never got going for him in Manchester, and he admits his start to life at the club was not an easy one.

“When I came to Manchester City at the age of 17 I had tactical problems,” he told L’Equipe.

“During my trial at City, when I didn’t understand English, nothing at all, I didn’t know where to position myself. So I had to learn everything at once, especially English.

“The funny thing is that at the time of my tryout, they did some research on me, and as I was at the Academy, I had disappeared from the official football radars; there was no trace of me since I was 13 years old.

“They thought: who is this one? It took a long time to clear up, even though other players from the Guillou Academies were in England, like Yaya Touré.

“I had to stay at home for three or four months before they found me and it was settled.”

Denayer has since enjoyed success away from the Etihad, becoming a regular for Lyon since his move there in the summer of 2018.

That has come after successful spells with Galatasaray and Celtic, both of whom he won domestic titles with.

The same cannot be said of his time with Sunderland, where a desperate campaign ended with the Black Cats bottom of the table and 16 points from safety.

That was a far cry from the comfort he’s enjoyed elsewhere, but Denayer insists it was all part of the learning experience. 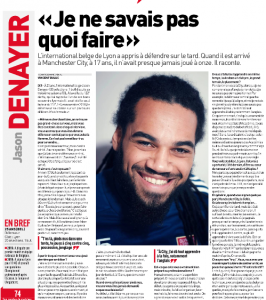 Asked about only joining top clubs, he said: “Yes, apart from Sunderland, but this was something else: to be champion, you just had to turn the classification upside down.

“I came out of two clubs where I won almost all the time, and if Sunderland was a shock, at that moment, it was a great experience, because you had to learn how to lose, or rather to learn how to live with defeat.”