Since 2008, either Cristiano Ronaldo or Lionel Messi has picked up the Ballon d’Or, but that ended when Luka Modric was awarded the prize on Monday.

The midfielder won the Champions League with Real Madrid last season and was instrumental in helping Croatia reach the 2018 World Cup final.

As part of the whole process, he’s given an interview to France Football in which he spoke about his time at every club, including the spell at Tottenham Hotspur.

France Football said that in his career, Modric has been rejected by Hajduk Split and Arsene Wenger at Arsenal, and asked if this ever made him doubt.

Modric said, “No never. But at eighteen, when I started my career, I never imagined reaching this level, even if I was dreaming to go far to play in big teams. The truth is that I have never doubted my qualities.

“Hajduk Split didn’t want me for various reasons. As to the refusal of Mr Wenger, I took it as a new misfortune, another hurdle. With the desire to prove to all these people that they were wrong.

“All clubs cannot always do the right pick. It was their opinion of me at that time. At eighteen, it is still unclear if a young player will make it or not.” 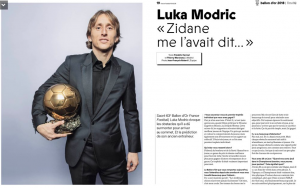 Arsenal’s decision to not sign the current Real Madrid player back then came as an advantage for Tottenham, who signed him in 2008.

Over the years, Wenger has missed out on or turned down the opportunity to sign several players for Arsenal, who went on to become world class players elsewhere.