Paulinho’s move to Barcelona has so far been a runaway success.

It’s fair to say the club’s fans weren’t thrilled ahead of the signing, players are supposed to go to Guangzhou Evergrande for big fees, not arrive from the Chinese side.

But Paulinho seemed to become a new man in China. A bad experience at Tottenham Hotspur perhaps left the player’s confidence shaken, yet he looks a different individual these days, even carries himself with a little more conviction.

The Brazilian has played 27 games for Barcelona so far this season, and has 8 goals and 2 assists, with Mundo Deportivo saying he ‘is already the most profitable signing for Valverde this season’.

In their Tuesday edition, the Catalan newspaper headline a snippet ‘The worst transfer in the history of Tottenham’, and there’s an implied mockery towards the club’s fans for dismissing Paulinho’s talents.

Paulinho is perhaps the ‘revelation’ of La Liga this season, say Mundo, and they point out he’s at the top of goalscoring midfielders in Europe, adding that must hurt (for Tottenham). 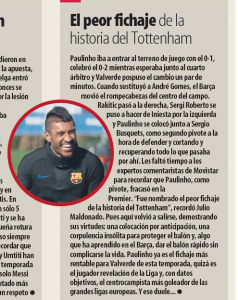 We did a little digging, and it was in a FourFourTwo poll that Paulinho was labelled the worst Tottenham recruit, with it being stated at the time: ‘Some limited players at least put in the effort, but even that was beyond him; managers gave unsubtle nods towards him crying off injured before European games.

Thinking about Paulinho makes me physically angry, and I’m glad he’s in China where I no longer have to look at him.’

That statement was only in March of last year, which shows how quickly the perception of Paulinho has changed. China not only packed up the Brazilian’s bank account but also turned him into born again top footballer.