Manchester City manager Pep Guardiola and Liverpool boss Jürgen Klopp battled it out for the title last season, with the Etihad club coming out top in the end.

The Reds, however, finished the campaign by winning the Champions League. It was the Merseyside club’s first success under their German manager, and won’t be the last.

Things have been incredibly positive for Klopp and Liverpool this campaign as the Anfield club are comfortably sitting on top of the league table. City are second, trailing the European champions by 25 points with a game in hand.

Lizarazu was full of praise of the Liverpool manager and also explained why he prefers Klopp’s playing style to that of Guardiola. 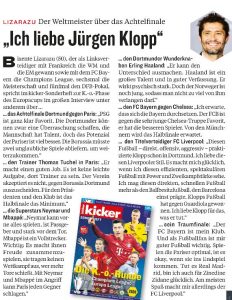 “It makes me happy when I see this efficient, spectacular football with power and fighting strength.

“I like this direct, fast football more than the possession football that Barcelona once shaped. Klopp’s football won against Guardiola. I love Klopp for what he does.”

Tottenham clause for Marcus Edwards rubbished – He could move to another PL club, Spurs get 50%

Tottenham clause for Marcus Edwards rubbished – He could move to...

Southampton man has been ‘proposed’ to club – Agents working to...