It’s best just to say it as it is. It’s been this way for some time, all part of frankly odd dynamics between some at Schalke and some in the media.

When things have been going wrong for the club, it’s abundantly clear that leaks are sent machine gun speed to the media to try and put blame on certain players.

Meyer wasn’t the only one who had it when he was there. In September 2016, Nabil Bentaleb, Eric Maxim Choupo-Moting, Baba Rahman, Leon Goretzka, Klaas jan Huntelaar, Breel Embolo and Franco Di Santo were all dubbed ‘Schalke slackers’ and several of them were the subject of negative daily campaigns verging on odd.

The following season, Meyer made a significant mistake when he made it clear he wouldn’t be renewing his contract with the club. There was a war of words, he dared to give some back, and he was ostracised.

Christian Heidel, Schalke’s general manager, said something in May which has been banged over the player’s head since. Heidel revealed the contents of a chat, or at least his version of it, that he’d had with Meyer’s agent Roger Wittmann after a renewal offer had been made.

Fawning all over Heidel and protecting the stream of information, the German sport media lapped it up, almost completely unquestioned.

And since then ‘world-class’ Max Meyer has been roundly mocked.

They mocked him for a lack of transfer interest.

They mocked him when he signed for Crystal Palace.

Now they mock him because he’s in a relegation battle.

Even Roy Hodgson is getting it. An article from SportBild this week is titled ‘What became of ‘world-class’ Max Meyer?’. 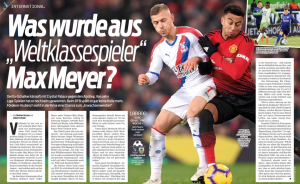 And the first paragraph is this, oozing with strange bitterness: ‘Maybe the oh so nice-looking older gentleman is only being vindictive. In 1997, Roy Hodgson was facing his biggest success. He was coach of favourites Inter Milan when the Italians failed sensationally against against Schalke in the UEFA Cup final.

Never again did Hodgson come so close to a significant title. Max Meyer was then barely two years old. This summer, he moved from Hodgson’s nightmare opponent Schalke to Hodgson’s current Crystal Palace team in the Premier League – and since then, Meyer’s career on the banks of the Thames is going down the drain.’

SportBild then, of course, go over the old Heidel agent claims and state it’s a fact Meyer didn’t go to the World Cup, just in case anyone had forgotten. He didn’t miss much.

Then his salary level is ridiculed, before it’s stated: ‘Meyer is not a regular player, although Palace has been without a win for nine games. Record in ten games: no goal, an assist.’

For ‘not a regular player’ it’s odd he’s started the club’s past three Premier League matches, against Chelsea, Tottenham and Manchester United.

Anthony Gosh, described as being part of an organised Crystal Palace fan group (we couldn’t find trace of him to check) is quoted as saying: “Meyer is not the creative midfielder we needed.”

Horst Hrubesch, who managed Germany’s Olympic team when Meyer won a silver, adds: “Now he has a responsibility to prove he can do it and that his decision was right.”

SportBild then get back to the crux of what they’re still fuming about: ‘As a reminder: At Champions League participants Schalke he did not want to stay despite an offered salary increase from 3.5 to 5.5 million Euros per year, felt unvalued and was eventually excluded from training.’

Maybe, just maybe, he wanted to go, and felt undervalued, because he, like others, had been the target of a media campaign as Heidel and co tried their best to divert blame as Schalke had a horrid start to the 2016 season?

And, yes, Schalke, a big German club, are in the Champions League. Hurrah. But they’re also 14th out of 18 in the Bundesliga and two spots above the relegation danger zone. ‘Oldie coach’ (their words) Hodgson and his minuscule Crystal Palace are also two places above the drop zone.

Max Meyer only turned 23 years of age in September, he’s made a move to a new league and country and will be aware he’s a figure of mockery for some sniggering journalists back home.

Maybe it’s time to give him a break.