The transfer slant regarding Aaron Ramsey is changing for Juventus, but Newcastle United remain in the picture to sign the Welshman.

That’s according to Tuttosport, who say the Turin club are now ‘ready to agree’ to loan the midfielder out in the January window. That could be significant for Newcastle’s chances, because it would likely mean they wouldn’t have to pay the player’s full wages, with Juventus continuing to pick up part of the bill.

For the player, it would mean he wouldn’t have to completely say goodbye to his contract with the Serie A club, which lasts until the end of June, 2023. It would also give him some protection against Newcastle being relegated, meaning he could simply walk away from the Magpies, and back to his big Juve deal, if Eddie Howe’s side are relegated to the Championship. 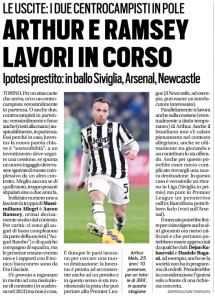 The situation is a ‘work in progress’, and it would appear Ramsey standing his ground over not taking a wage cut is something that will work well financially for him.

Newcastle United is the only club named by Tuttosport as a possible destination.

Juventus also want to loan Arthur out, although the Magpies aren’t named in that race, with Sevilla and Arsenal having weak links to a potential deal.