To be honest, when the Daily Record reported that Manchester United are interested in Éder Militão from Porto, we thought newspaper O Jogo would make a big noise about it today.

But what the local outlet brings is just a short column covering the news, as they don’t seem to know anything more about this story.

It’s actually Lisbon newspaper Record who gives more attention to the rumour this Wednesday, bringing a bigger article, and adding a few bits to it.

They say it’s no surprise that Militão is being followed by big clubs, because this chase had already happened in the summer, when he left São Paulo for the Dragons.

Now with his good performances in the Portuguese league and Champions League, he’s just proving himself at a higher level. 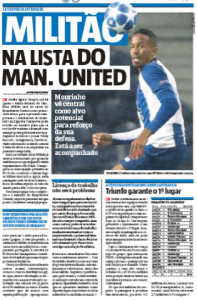 Something interesting added by Record is about the player’s work visa. Even though he isn’t often called up for the national team, the newspaper points out that he should have no problem to join a Premier League side, since his youth, his potential and his two last call-ups could be some arguments used by Manchester United.

What none of the newspapers mention is that Militão has a €50m release clause at Porto, and it’s very likely that this will be the price demanded by the club.

That would see him sail through the points need on a permit appeal anyway.

Although the player had mostly been used as a right-back for São Paulo before leaving Brazil, he’s now an important piece in Porto’s central defence, and even though the team is in need of a right-back, they are not moving him due to his good form.