Home Europe Wolves ‘willing to shell out’ huge fee to get transfer over the...
SHARE

Portugal’s major clubs seem to be in a never ending battle with their finances. Despite a string of big sales down the years, the likes of Benfica, FC Porto and Sporting are constantly on the edge of a major financial wobble.

Wolves have taken advantage of this in the past, notably when they signed Ruben Neves from Porto. The club needed a signing within 48 hours, and Nuno Espirito Santo was able to help out, in a deal which was beneficial for all involved.

Now it’s Benfica’s turn to need cash, and Record report they’re looking for a cash injection of around €60m. Selling Vinicius would cover that, according to the Portuguese newspaper, and it’s claimed Wolves are ‘willing to shell out’ the huge fee required.

Wolves have already failed once, with a Vinicius deal collapsing due to the lack of a work permit. At the figures being mentioned that would no longer be a problem. 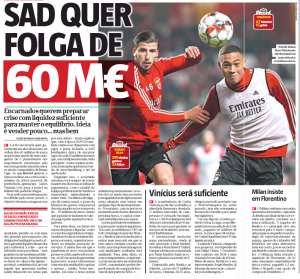 But it has to be questioned whether Wolves really would go in with €60m. Any purchase would surely be dependent on Raul Jimenez leaving, and paying Benfica more for Vinicius than Sporting got for Bruno Fernandes just doesn’t feel realistic.

It could be that any deal has a lower base price, with bonuses then added to reach that €60m amount.