Although most of the Portuguese outlets keep naming West Ham United as the most likely destination for the Porto striker Moussa Marega, Wolverhampton Wanderers also get a mention today.

It comes from newspaper Correio da Manhã, who have a story about the many sales that the Dragons are about to do in the next transfer window.

Speaking of Marega, they say the striker has it ‘all agreed’ to leave Porto at the end of the season. His sale will make €40m, the same amount of his release clause.

It’s claimed that West Ham and Wolves are both in the ‘front row’ to sign the player, who has expressed his wish to move to the Premier League many times. 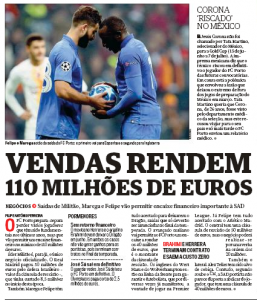 That’s all they have to say for now, as there are no details on how advanced talks with each club are going.

It’s believed Marega has it agreed with Porto that they must accept a reasonable bid for him, but none of the clubs have made an official offer so far.

Since Porto still have a league and a cup title to play, perhaps things will only develop in a couple of weeks.