Wolverhampton Wanderers are ‘very interested’ in Real Madrid’s Dani Ceballos, according to reports from Spain.

The 24-year-old spent the last two seasons on loan at Arsenal and had earlier stressed he doesn’t want to go out on a temporary deal next season.

On Thursday, ABC reported Los Blancos consider the midfielder ‘transferable’ and have put a €30m valuation on him. The La Liga side are aware it’s difficult to find a team for the Spaniard who can meet their asking price.

Ceballos’ desire is to return to the Santiago Bernabéu, and if Carlo Ancelotti decides not to rely on him, the player will seek a permanent move elsewhere.

These claims are relayed in today’s edition of Sport and they mention that Wolves, along with AC Milan and Real Betis, are keen to secure the Spaniard’s signature.

The newspaper adds ‘none of them meet all the requirements’ to conclude the deal this summer. 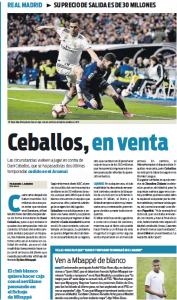 Milan are looking to take Ceballos on a zero cost loan deal, while Manuel Pellegrini’s side can only undertake his signing if they manage to make some important sales.

Wolves, on the other hand, ‘have the necessary liquidity’ to acquire the Real Madrid man’s services, but Sport explain Ceballos is not in favour of returning to the Premier League.

It’ll be interesting to see how the situation with Ceballos is resolved.