This week, reports from the English media claimed that to replace the potential departures of Ruben Neves and João Moutinho, Wolverhampton Wanderers are eyeing the signing of Sporting midfielders Matheus Nunes and João Palhinha.

Among the many stories in response we saw in the Portuguese press, there was one today claiming that Nunes is actually not interested in making that move, as he’s only leaving the Lions to join a club who’ll fight for big things.

Now it turns out that in the same page, newspaper A Bola adds something about Palhinha, and it doesn’t seem like he has the same thought as his teammate.

The outlet writes that Palhinha has ‘never hidden his wish of playing in the Premier League, and Sporting ‘will not close the door’ to his ambition this summer. 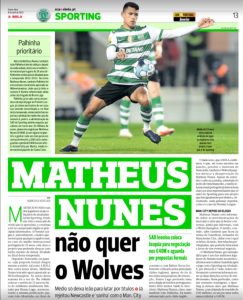 Palhinha is also said to be cheaper than Nunes, as Sporting would accept negotiating him for around €30m, while his teammate is only leaving for over €40m.

A Bola recalls that Wolves were already interested in the signing of the former Braga midfielder even before Bruno Lage took charge of the club.

Now as the interest seems to continue, the summer window turns out to be a fine opportunity for the Molineux side to finally go and get him.