Helder Costa receives repeated attention in the Portuguese media despite not having a high profile in English football.

The Wolves attacker has shown enough when given the opportunity to justify the real excitement around him and Portuguese newspaper Record believe he’ll be displaying his talents at a higher level next season.

Wolves are currently in a battle at the wrong end of the Championship and promotion is a very distant dream, but Record believe that will have little impact on Costa’s future.

The 23 year old former Benfica player is expected, by Record at least, to part ways with Wolves in the future and make a move upwards to the Premier League, with several top flight clubs said to be interested in the player.

Costa was much linked with a Premier League move during the January transfer window, but those claims seemed partly motivated to convince Wolves to pay up for the player, 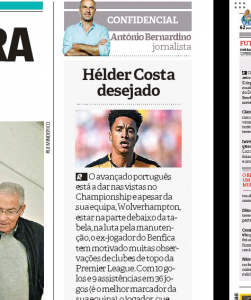 with Benfica needing a cash-flow boost.

The Lisbon club were looking for sales and Costa making his Wolves move permanent was an ideal opportunity for them.

Wolves stand a reasonable likelihood of losing Costa during the next window, but Record believe they’ll be able to console themselves with a fee ‘far higher’ than what they sent to Benfica during January.