Aboubaker Es Sahhal is currently on a youth contract with French club Guingamp.

That deal ends in June and unless he signs a full professional contract before then, he’ll be able to lave on a free in the summer.

Guingamp will still be able to get training compensation should that be the case, but it’s a situation the Ligue 1 club will likely try to avoid.

Es Sahhal is attracting interest from other clubs, reports L’Equipe in their Tuesday edition.

Wolves and Stoke City are described as being ‘in the ranks’ to sign the young striker, and the French newspaper says Portuguese giants Benfica and Atalanta of Serie A are also interested. 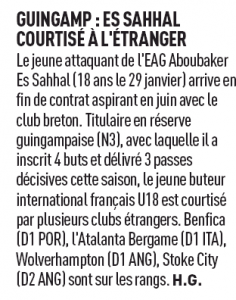 The 18 year old is currently playing for his club’s reserve side and so far this season he’s scored four goals and added three assists.

A France U18 international, Es Sahhal is clearly rated by those in charge of youth football in the country.

There’s no further detail on what Wolves or Stoke will do with their interest.