Newspaper A Bola today features a quite short story to talk about the situation and claim that the Premier League side continue to have the player ‘very well referenced’.

They recall that Wolves were close on making a bid for Palhinha last summer, but that never happened, and it now turns out that he will cost a lot more this time.

Sporting were demanding only €15m for the midfielder one year ago, and now that he had a very good season with the Lions, his price has gone to €30m. 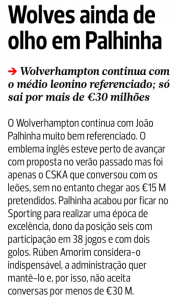 A Bola writes that Sporting manager Ruben Amorim considers Palhinha to be ‘indispensable’, and that’s why the Lions will demand that much for him.

It turns out that newspaper O Jogo writes something similar today, claiming the coach want to hold the young players from the squad, and the club will work for it.