Wolverhampton Wanderers have started negotiations to sign Benfica striker Haris Seferovic, according to claims from Portugal.

Newspaper Correio da Manhã today features a story saying that the Eagles do not count on the player for next season, and so far, there are two sides who have made contact for his transfer.

Both of them have former Benfica managers in charge. One of them is Wolves, and the other is Fenerbahce, who recently hired Jorge Jesus.

However, the two clubs are still far from reaching a deal. That’s because the Eagles set a price of €10m for the sale, and the interested sides are only willing to pay half of that. 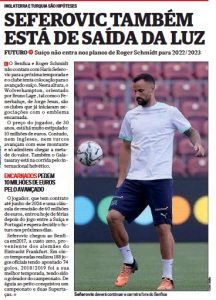 It’s said Seferovic expects to sort his future out in the coming days, since he’s not in the plans of Benfica’s new manager Roger Schmidt.

In the recently concluded season, the striker scored five goals and added three assists in 15 appearances, getting few chances to play for the Eagles, partly because of injury issues.

With Wolves normally going for players who stand out in Portugal, it’d only make sense for them to chase Seferovic if they see him as a big market opportunity.