Wolverhampton wasn’t such a known city in Portugal not so long ago.

People from Iberia aren’t big fans of the British weather, so even though London has something to attract many tourists, most other English cities can’t really do the same.

But the propaganda generated by Portuguese players is probably making many people curious about the city and the club of Wolverhampton lately. The Lisbon press, using their fantastic connections, has often interviewed the likes of Ruben Neves, Ivan Cavaleiro and Helder Costa, with none of them getting tired of saying how wonderful the West Midlands is.

This time it’s the turn of Ruben Neves, speaking to A Bola, and despite talking a lot about his old club Porto, there was also a lot to say about his time at Wolves since signing for the club last summer.

“It was the best step I took in my career, it was also the first one,” Neves told A Bola. “I think that was a great decision. I don’t regret anything and I am more and more convinced that it was the best for me.”

Asked if he feels much pressure being Wolves’; most expensive signing, Neves said: “Honestly, I don’t even remember that in my day to day. This is the thing that comes out in the press, but that does not influence inside.

“There isn’t even time to think about it. What I can say is that I was well received, I can’t point anything at anyone. In all the teams, there is always one or another player that doesn’t pass much confidence, but here I didn’t have that problem. We have a spectacular dressing room.”

With many Portuguese players managed by a Portuguese boss, A Bola asked if it’s them who get the most criticism in training: “We don’t take much in the head, but we are more under the attention of coaches because they know us better and speak the same language.

“Communication between us is easier, more immediate, because there are those situations in football where the words come out in Portuguese, even if we know how to speak English. This happens often in the training… Sometimes the boss is confused and speaks in Portuguese. Then he clicks and starts to speak English. It’s normal.”

Regarding living in England, with A Bola already mentioning the bad weather in the question, Neves claims that everything is fine: “Look, we’re really enjoying it! The city doesn’t have much to do but it suits me, because I can be quiet in my corner.

“Even so we leave the house almost every day, we always arrange something to do. And in the holidays we take the chance to know other places. We’ve been to London twice and usually go to Birmingham, which is near Wolverhampton.” 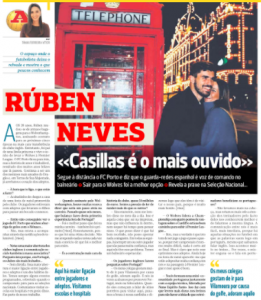 Ruben’s wife Debora also spoke to A Bola. The physiotherapist, who had her first child four months ago, also says she’s also happy in Wolverhampton, even though the first impression wasn’t exactly the best.

“Before Ruben went, we looked for houses on the internet and saw one which was very big and a little scary, with a huge road from the gate to the entrance of the house. I soon told Ruben to rule it out, but he rented the house as soon as he arrived.

“He loved having lots of room for the dogs and said it would be a good opportunity for us. And here we are. I don’t have a maid, so I always have a lot to clean, because the house is big. But we are happy and that is the most important thing.”

Every week, almost without fail, one of Wolves’ Portuguese gang takes his turn to praise the club, the city, the Championship, and the football being played this season. The overriding impression is of a very happy club and one which other Portuguese players would surely be keen to join.

Sport Witness cover the Portuguese media on a daily basis, only made possible by having a full time native speaker of the language. This has meant Wolves fans have read many interviews, with the correct translation, they’d have otherwise missed.

Therefore, if you’re a journalist about to copy and paste big sections of the quotes, and don’t speak Portuguese yourself, or even read the newspapers in question, then we’d appreciate if you credit where you found it.

So, rather than ‘Neves speaking to the Portuguese press’, both A Bola get the credit for the interview, and Sport Witness the nod for doing all the sourcing and translating.