It’s no secret that Italian newspaper Tuttosport has been trying to make Raul Jimenez the man of the moment. Following reports of Juventus’ interest in signing the striker, the outlet has been publishing daily stories on the chase.

The Wolverhampton Wanderers star is featured once again in today’s edition, this time with a former teammate talking a little about him.

Tuttosport invited Brazilian goalkeeper Julio Cesar, who’s famous in Italy for winning the treble with Inter Milan, to bring his opinion on the Wolves player.

Junior Cesar played alongside Jimenez at Benfica, and had many compliments to make to his former teammate.

“He’s a powerful, fast, technical and strong-headed striker. He scores, but he is also one who works a lot for the team”, Julio Cesar told Tuttosport.

“Raul works a lot for his teammates, he is always the first to press and never backs down.” 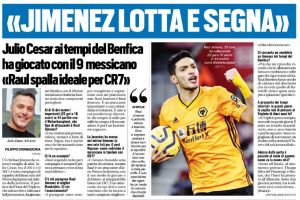 Recalling their time training together, Júlio César, who’s always been a good penalty saver, says he didn’t have a lot of success against Jimenez.

“More than an episode, I remember that in training I struggled a lot in the penalty matches against him. Raul Jimenez has a way of kicking from the spot that reminds me of Balotelli’s: he almost always manages to throw off the goalkeepers.”

One of the hottest topics about this rumour is about how Raul Jimenez would play alongside Cristiano Ronaldo. Júlio César had a little to say about that as well.

“Cristiano Ronaldo likes to start from the left, while Raul is a box striker. I think Jimenez, with his way of playing and fighting, would integrate well with CR7. He’s a top club striker and I’m convinced that among many champions he would improve further.”

The Brazilian was also asked to compare Jimenez to Mario Mandzukic: “Comparisons are always complicated and above all I never like them. Raul Jimenez is Raul Jimenez. He’s an important striker and an extraordinary fighter. He’s one to whom you must never say anything: he always gives a thousand per thousand on the pitch, it’s his character. And then he’s a very good guy.”