Home Europe Wolves source confirms they ‘will not advance’ on signing – Unwilling to...
SHARE

When signing Vitinha from Porto on a loan deal last summer, Wolverhampton Wanderers had a clause which meant they could make the transfer a permanent move if paying €20m.

That could be triggered until the end of June, and when it didn’t happen, reports from Portugal claimed Wolves had no money, with the club asking for 20 more days to make their decision.

Well, now that the time has passed, the local media is back to saying that Vitinha is indeed not staying with Wolves, and Porto must now find a solution for him.

Newspaper Record writes that a source from the Molineux side confirmed that the club ‘will not advance’ to buy the midfielder in this transfer window. 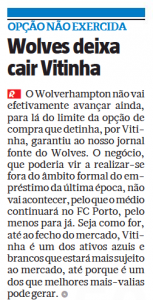 That means Porto are back putting Vitinha on the market, especially because the club are in need of making sales and he’s one of their main assets.

During his season with Wolves, the midfielder had 22 appearances, with one goal scored and one assist made.