The optimism regarding Willy Boly’s permanent transfer to Wolverhampton Wanderers continues to be pretty big in Portugal.

Two of the biggest sports newspapers in the country, A Bola and Record, have very similar stories regarding this move today, both saying it’s very likely to happen.

The articles are about Porto’s financial plans for the end of the season, as the club have a certain goal they hope to meet with player sales.

As the likes of Ricardo Pereira and Bruno Martins Indi already have their transfers confirmed, these papers now expect Boly to be the next one. 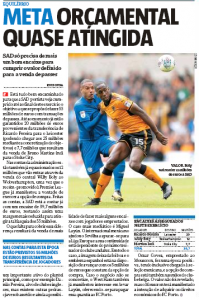 Using their own words, A Bola claims that Boly’s transfer ‘won’t take long to be made official’, while Record writes that Wolverhampton have ‘already shown the desire to use the buying option’.

Boly is expected to join Wolves in a €12.5m deal, as this amount had previously been set in his loan contract.

The defender has made 37 appearances for the club this season.