Wolverhampton Wanderers are eyeing a move for Las Palmas youngster Alberto Moleiro, who could be the next Pedri out of the Spanish club’s youth system.

That’s according to La Provincias, who cover the interest from Wolves after the player’s recently impressive display against them in pre-season.

Las Palmas have become something of a production line for young talent in recent years, with Barcelona star Pedri the shining example of it.

He made the step up from Las Palmas in an €18m move in 2019 after barely appearing on the radar of the Spanish club and has not looked back since, establishing himself as a star for both Barcelona and Spain since.

It means the attention is firmly on Las Palmas, and La Provincias reports that Wolves have their eyes firmly on Moleiro.

He is the ‘new jewel’ at the Spanish club and has not gone unnoticed by scouts in Europe, with the ‘tentacles of the Premier League’ already reaching out. 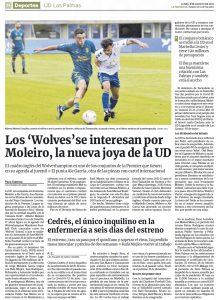 Moleiro is said to be ‘on the agenda’ at Wolves, who got to watch the youngster first hand in a recent clash between the two sides.

Indeed, he was impressive in that game and has been ‘one of the great sensations’ of pre-season for Pepe Mel this year, so much so he will be receiving minutes in the first team this season.

That could be ruined by Wolves, however, who are watching the youngster and seemingly keen to bring him to England.

There’s no mention of an asking price or anything of that nature, in fact, Moleiro’s agent has said he is in the perfect place at Las Palmas, but the interest is there from Bruno Lage’s side nonetheless.