Home Premier League Wolves could be set to miss out on defender – Despite insinuations...
SHARE

Wolves have spent much of the past month being linked with Edson Alvarez.

The Club America defender is currently with Mexico at the Gold Cup, where they’re expected to reach the final, playing against Haiti in the semi on Wednesday morning.

Reports from Mexico last week stated a move for Alvarez to Europe was already agreed, as long as he doesn’t get himself injured at the tournament.

Later the same week, Wolves were named as the player’s destination, with some excitement in Mexico because fans of the club appear to be welcoming the deal.

Now there are claims from the Netherlands which throw doubt on the situation. 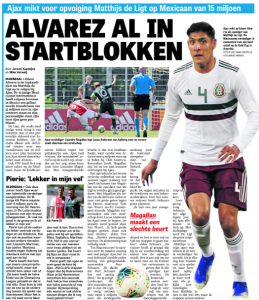 The Dutch defender is thought to be close to signing for Juventus, after a transfer saga which has lasted for over a month.

A transfer fee is put at around €15m, a figure which wouldn’t be a problem for Ajax given the money they’re bringing in this summer.