Wolverhampton Wanderers midfielder Ruben Neves was one of the Portuguese players who spoke to the local press at the national team camp on Wednesday.

It’s normally rare for journalists to be so direct about transfer rumours at this time of the season, but the midfielder was asked about a specific move.

A reporter pointed out that Neves has just beaten Pep Guardiola’s side in the Premier League, and asked him if he’s planning to join ‘a big club’ like Manchester City.

“I don’t think about that. I try to do my best, both at the club and at the national team. Whatever comes will come naturally. I focus on my work to the fullest,” said Ruben Neves (via Correio da Manhã). 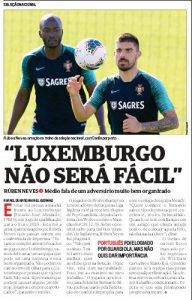 Several Portuguese newspapers have still been speaking of the FA charge against Bernardo Silva, who’s having his first game for the national team since the controversy with his Manchester City teammate Benjamin Mendy.

Ruben Neves was also asked about it, and his opinion is pretty similar to the ones of Pep Guardiola, Fernando Santos and João Mário, insisting Silva is a very good guy and shouldn’t be accused of such a thing.

“It’s an absurdity. Anyone who knows Bernardo knows that he’s an excellent person, very playful and when you have confidence with a friend you put that picture, nobody has anything to say.

“The person in question has already said that he didn’t take it wrong, it was a joke, they are great friends who have played together at Monaco. It’s what it is… We all know that they have a great relationship of friendship and it makes no sense what has happened.” (via O Jogo).