Rui Patricio’s situation rumbles on in the Portuguese media, and over the past few days it’s become increasingly clear that Wolves have a stronger hand than Sporting would like.

After all the threats of bans and FIFA action following Patricio signing for Wolves, after rescinding his contract with Sporting, the Lisbon club are now realising they have to be less bullish.

That’s because, as reported again by Record on Saturday, Wolves ‘remain confident’ and are standing firm. Their offer is the original €18m with a big chunk of that having to pay off a debt Sporting owe to Gestifute.

This isn’t Wolves or Jorge Mendes being awkward, but rather something which Sporting agreed to at the time of renewals for other players. They wanted to defer agent payments, so agreed the money, around €7m owed, would come from Patricio’s transfer fee.

After a meeting in London, Sporting have been left under no doubt that Wolves are confident Rui Patricio can prove ‘just cause’ for cancelling his contract, which could endanger any fee.

On top of that, O Jogo, another Portuguese newspaper, today report several officials from the old Sporting regime, including former president Bruno de Carvalho, are being dragged 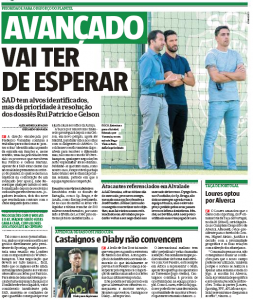 into the investigation around the attack at the club’s training ground, with the suggestion they had something to do with it.

That would further strengthen the case of Patricio and Wolves.

Despite all that, Record state ‘it is expected that there will be white smoke by the end of next week’, which would mean an agreement being found. That’s optimistic.