Michal Pazdan is facing the first transfer window in a long time without any serious interest, reports Poland’s Gazeta Wyborcza.

The central defender is now 30 years of age and frustrated with the situation. After impressing at Euro 2016, the player had a queue of clubs waiting to sign him, but Legia Warsaw held them all off.

Then, last winter, the newspaper reports Wolves came in with an effort. The Championship club were ready to offer a total of €3.5m for Pazdan, made up of €2m plus a further €1.5m in bonuses.

Other clubs were interested too, but either Legia turned them away, as they did with Wolves, or the player didn’t fancy it, such as moves to Grozny and Turkey. The defender’s wife wasn’t keen on the latter and it seems nobody was really keen on the former.

Now there’s huge frustration from the player he may have missed the boat, and if things 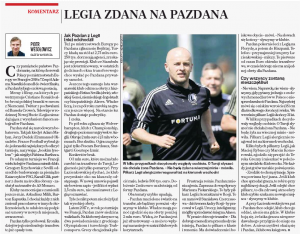 don’t change over the next couple of windows Legia Warsaw will also have to accept they stopped a transfer when it was probably deserved, and the money that comes with it.

Gazeta Wyborcza explain Legia have at times gambled thinking they’d get more, and that looks a gamble lost.

For Pazdan the Wolves chance has likely gone, with the club a very different one to what it was a year ago. The player has since got a new agent, you can’t blame him really.