Fanatik claim Liverpool have reached an agreement with Wolverhampton Wanderers to loan Loris Karius for next season.

The Turkish newspaper report the Premier League club are aware of negotiations between Karius and Besiktas with regards to terminating his loan contract, which will allow him to head to Wolves this summer. The Istanbul club did have a right of redemption for the player.

It’s reported the move now depends on Karius’ decision and if he agrees to head to Molineux on a loan deal then this transfer will happen.

The 26 year old has had a turbulent spell in Istanbul, with his costly errors and issues off the pitch not helping him. 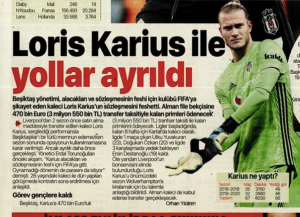 Karius’ contract at Anfield will expire at the end of June 2021, and if Fanatik reports are to be believed then he will return to the Premier League, this time with Wolves.

However, it curious why Wolves would want the Liverpool player. He’s not at the same level as Rui Patricio and would be a strange choice for a new number two.