Rafa Mir hasn’t featured for Nottingham Forest for over a month and his loan move with the Championship side could be cut short in the winter market.

On January 3rd, we carried a report from AS, who explained SD Huesca have reactivated their interest in the forward after failing to land him in the summer. Later that day, Marca reported Mallorca have set their sights on the Wolverhampton Wanderers owned player.

Today’s edition of AS has a report on Mir with the headline ‘Huesca is still waiting for striker Rafa Mir’.

However, first the player’s temporary deal with Nottingham Forest must be terminated so that he can move to another club in January.

It’s claimed Mir has several proposals from first and second division Spanish clubs, and Huesca have maintained contacts with him and his surroundings. The report also adds the Segunda División side view it as ‘possible’ for them to sign him. 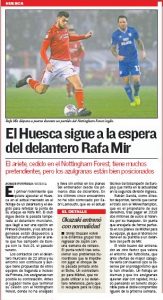 Mir would fit well into Míchel’s system at the Spanish side and the manager’s approval for the transfer is valued by those around the player.

Huesca sporting director Rubén García now needs to reach an agreement with Wolves, once Mir has been freed from the loan arrangement.