Wolverhampton Wanderers take on Espanyol in the Europa League on Thursday.

The fixture will see Adama Traoré return to Barcelona and on Wednesday, Spanish newspaper AS gave an insight on the winger’s early days.

Another newspaper Sport managed to interview the 24-year-old and he spoke at length about his childhood in Catalonia.

“The truth is that if my parents put us [in football] it’s because they wanted us to work for discipline in a sport that I liked,” he explained.

“In the area where I grew up there were many fights, many gangs, problems. We, my brother and the group that played football, no matter what band it was or what culture it came from, football united everything.”

When asked if he was tempted to join any of the gangs back then, the Wolves wideman said: “Yes, yes, yes. Many times. Me, my brother, a Dominican friend, everyone. At that time, belonging to a gang was popular.”

Although it was tempting to be a part of gang, becoming a professional footballer took priority.

“But we had a different mentality, we wanted to be football players, we didn’t want to be in any gang, in any kind of fights. And fights were seen almost every day,” the Wolves star stressed.

“I started playing at La Florida, in an ethnic neighbourhood of L’Hospitalet. I wanted to be a footballer and not be in a gang, with daily fights.

“I’ve seen fights with guns, knives, bats, bottles… of everything. I worked the physique so that my muscles could withstand my explosiveness.

“I’ve been in them! Yes, yes, of course. In the school where I was there were gangs. And they fought each other constantly. They have done a great job at Hospitalet, everything has calmed down a lot.”

Traoré also revealed there were several of them who were good at football, but situations and circumstances forced them to quit the sport. He explains the importance of being focused, despite being in tough situations.

“A lot. I played with them or against them in the blocks, with incredible quality, but the fact of being carried away by drugs, by gangs, by relationships, in the end they were lost,” he added.

“The gangs went by zones. Depending on where you were going, they told you, ‘But what gang are you from, where do you come from, why are you here?’ If you didn’t know them, or had not touched them, they could get you into trouble. 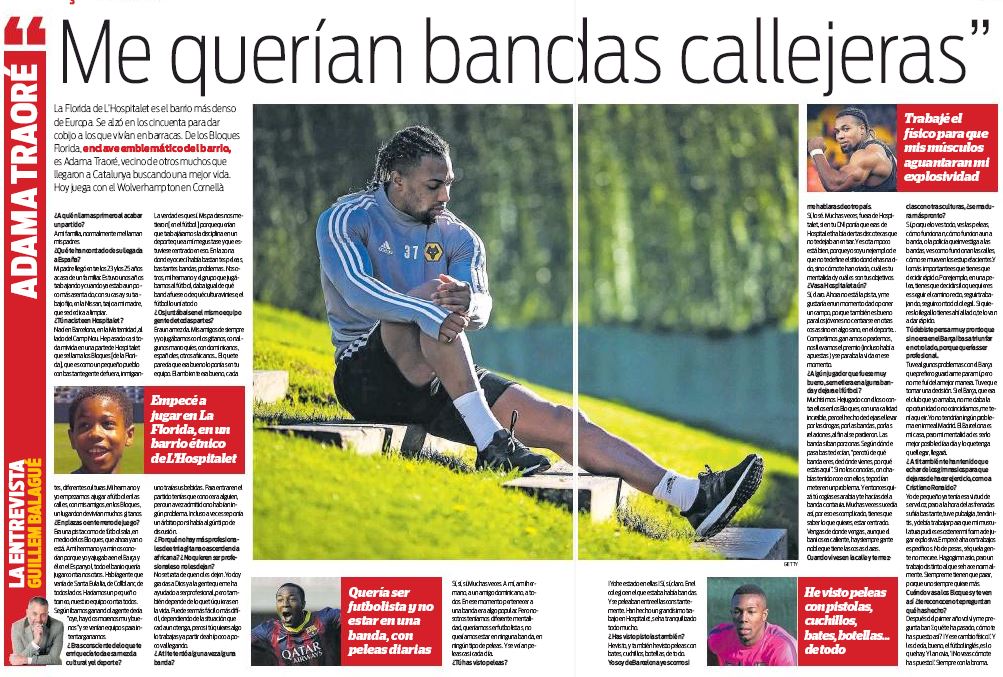 “And then maybe you took that anger and became the opposite gang. Many times, it happened like that, that’s why it’s complicated, you have to know what you want, be focused. Wherever you come from, even if the neighbourhood is rough, there are always noble people who have things clear.

“Yes, because you see everything, you see the fights, how they work, how a gang works, or the police investigating the gangs, you see how the streets work, how the narcotics move. And the most important thing is that you have to decide quickly.

“For example, in a fight, you have to decide if what you want is to follow the right path, keep working, continue with everything legal. If you want the illegal [way], you have it there next, they will give it to you quickly.”

Even though his comments suggest he has come a long way, the Wolves attacker has stressed the importance of improving himself further.

“Barcelona is my home, but my mentality is to be the best possible day by day and what has to come, will come,” Traoré concluded.